Physicists in the Laboratory for Attosecond Physics at the Max Planck Institute for Quantum Optics (MPQ) and at the Ludwig-Maxmilians-Universität (LMU) Munich have developed a novel type of detector that enables the oscillation profile of light waves to be precisely determined.

Light is hard to get a hold on. Light waves propagate with a velocity of almost 300,000 km per second, and the wavefront oscillates several hundred trillion times in that same interval. To work with light, one must control it – and that requires precise knowledge of its behaviour. It may even be necessary to know the exact position of the crests or valleys of the light wave at a given instant. Now, a team at the Laboratory for Attosecond Physics (at the Max Planck Institute for Quantum Optics and LMU Munich) has developed a new technique, which does precisely that, and enables physicists to characterize pulses of laser light with breathtaking speed.

In the case of visible light, the physical distance between successive peaks of the light wave is less than 1 micrometer, and peaks are separated in time by less than 3 millionths of a billionth of a second (<3 femtoseconds). Researchers based at the Laboratory for Attosecond Physics (LAP) are now in a position to measure the exact location of such peaks within single ultrashort pulses of infrared light with the aid of a newly developed detector.

Such pulses, which encompass only a few oscillations of the wave, can be used to investigate the behaviour of molecules and their constituent atoms, and the new detector is a very valuable tool in this context. Ultrashort laser pulses allow scientists to study dynamic processes at molecular and even subatomic levels. Using trains of these pulses, it is possible first to excite the target particles and then to film their responses in real time. In intense light fields, however, it is crucial to know the precise waveform of the pulses. Since the peak of the oscillating (carrier) light field and that of the pulse envelope can shift with respect to eachother between different laser pulses, it is important to know the precise waveform of each pulse.

The team at LAP, which was led by Dr. Boris Bergues and Prof. Matthias Kling, has now made a decisive breakthrough in the characterization of light waves. Their new detector allows them to determine the »phase«, i.e. the precise positions of the peaks of the few oscillation cycles within each and every pulse, at repetition rates of 10,000 pulses per second. To do so, the group generated circularly polarized laser pulses in which the orientation of the propagating optical field rotates like a clock hand, and then focused the rotating pulse in ambient air. The interaction between the pulse and molecules in the air results in a short burst of electric current, whose direction depends on the position of the peak of the light wave. By analyzing the exact direction of the current pulse, the researchers were able to retrieve the phase of the »carrier-envelope offset«, and thus reconstruct the form of the light wave. Unlike the method conventionally employed for phase determination, which requires the use of a complex vacuum apparatus, the new technique works in ambient air and the measurements require very few extra components. »The simplicity of the setup is likely to ensure that it will become a standard tool in laser technology«, explains Prof. Matthias Kling.

»We believe that this technique can also be applied to lasers with much higher repetition rates and in different spectral regions,« says Dr. Boris Bergues. »Our methodology is of particular interest in the context of the characterization of extremely short laser pulses with high repetition rates, such as those generated at Europe’s Extreme Light Infrastructure (ELI),« adds Prof. Matthias Kling.

When applied to the latest sources of ultrashort laser pulses, this new method of waveform analysis could pave the way to technological breakthroughs, as well as permitting new insights into the behaviour of elementary particles »in the fast lane«. 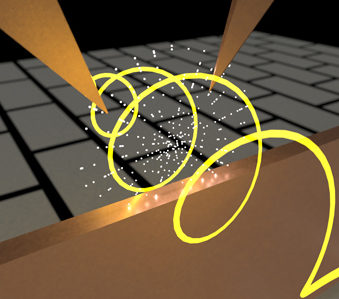