An international team of physicists has monitored the scattering behavior of electrons in a non-conducting material in real-time. Their insights could be beneficial for radiotherapy.

We can refer to electrons in non-conducting materials as ‘sluggish’. Typically, they remain fixed in a location, deep inside an atomic composite. It is hence relatively still in a dielectric crystal lattice. This idyll has now been heavily shaken up by a team of physicists led by Matthias Kling, the leader of the Ultrafast Nanophotonics group in the Department of Physics at LMU, and various research institutions, including the Max Planck Institute of Quantum Optics (MPQ), the Institute of Photonics and Nanotechnologies (IFN-CNR) in Milan, the Polytecnico Milano, the Institute of Physics at the University of Rostock, the Max Born Institute (MBI), the Center for Free-Electron Laser Science (CFEL) and the University of Hamburg. For the first time, these researchers managed to directly observe the interaction of light and electrons in a dielectric, a non-conducting material, on timescales of attoseconds (billionths of a billionth of a second). The study was published in the latest issue of the journal Nature Physics.

The scientists beamed light flashes lasting only a few hundred attoseconds onto 50 nanometer thick glass particles, which released electrons inside the material. Simultaneously, they irradiated the glass particles with an intense light field, which interacted with the electrons for a few femtoseconds (millionths of a billionth of a second), causing them to oscillate. This resulted, generally, in two different reactions by the electrons. First, they started to move, then collided with atoms within the particle, either elastically or inelastically. Because of the dense crystal lattice, the electrons could move freely between each of the interactions for only a few ångstrom (10-10 meter). “Analogous to billiard, the energy of electrons is conserved in an elastic collision, while their direction can change. For inelastic collisions, atoms are excited and part of the kinetic energy is lost. In our experiments, this energy loss leads to a depletion of the electron signal that we can measure,” explains Professor Francesca Calegari (CNR-IFN Milan and CFEL/University of Hamburg).

Since chance decides whether a collision occurs elastically or inelastically, with time inelastic collisions will eventually take place, reducing the number of electrons that scattered only elastically. Employing precise measurements of the electrons’ oscillations within the intense light field, the researchers managed to find out that it takes about 150 attoseconds on average until elastically colliding electrons leave the nanoparticle. “Based on our newly developed theoretical model we could extract an inelastic collision time of 370 attoseconds from the measured time delay. This enabled us to clock this process for the first time,” describes Professor Thomas Fennel from the University of Rostock and Berlin’s Max Born Institute in his analysis of the data.

The researchers’ findings could benefit medical applications. With these worldwide first ultrafast measurements of electron motions inside non-conducting materials, they have obtained important insight into the interaction of radiation with matter, which shares similarities with human tissue. The energy of released electrons is controlled with the incident light, such that the process can be investigated for a broad range of energies and for various dielectrics. “Every interaction of high-energy radiation with tissue results in the generation of electrons. These in turn transfer their energy via inelastic collisions onto atoms and molecules of the tissue, which can destroy it. Detailed insight about electron scattering is therefore relevant for the treatment of tumors. It can be used in computer simulations to optimize the destruction of tumors in radiotherapy while sparing healthy tissue,” highlights Professor Matthias Kling of the impact of the work. As a next step, the scientists plan to replace the glass nanoparticles with water droplets to study the interaction of electrons with the very substance which makes up the largest part of living tissue. (Nature Physics 2017) 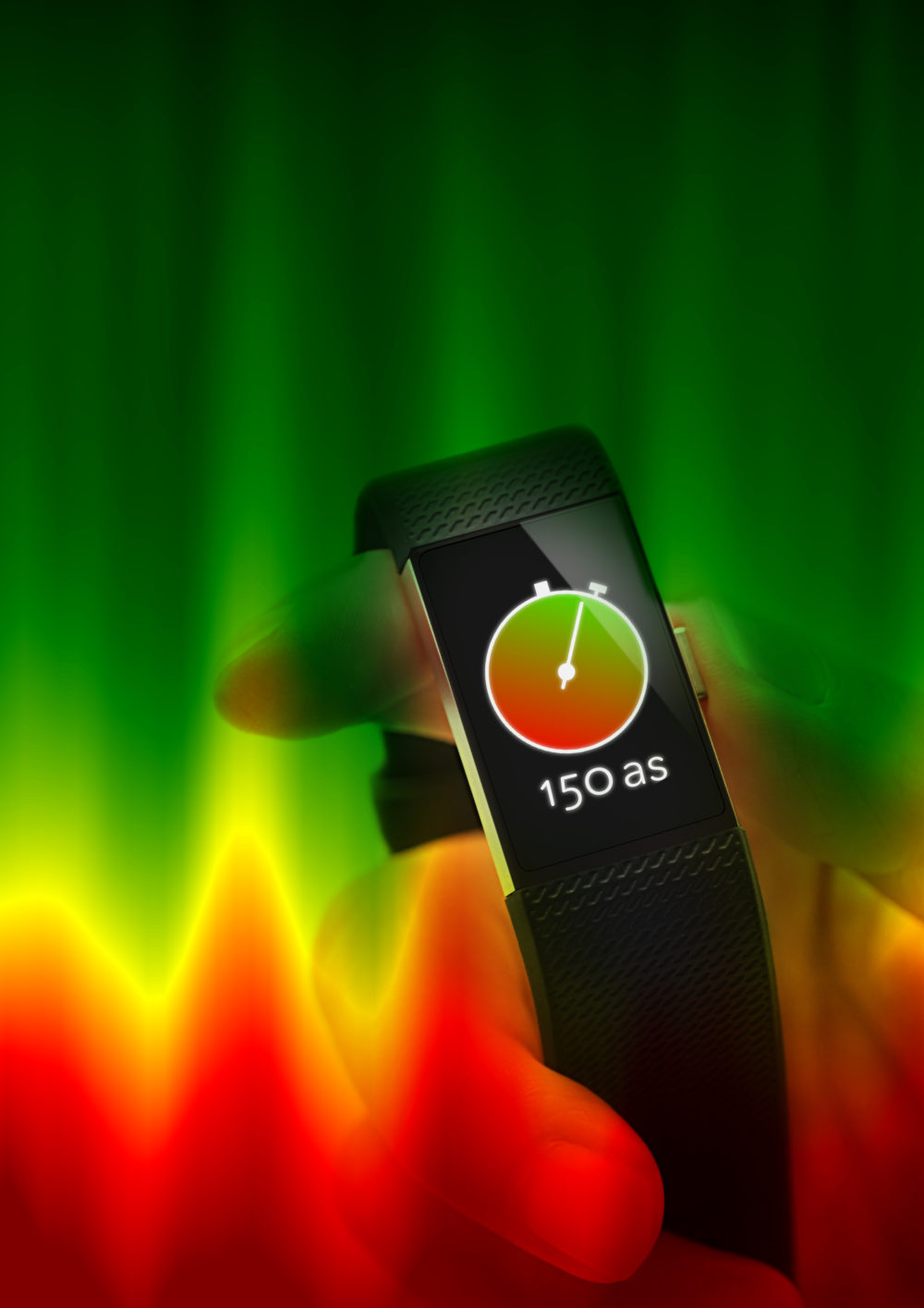 A team of physicists clocked the time it takes electrons to leave a dielectric after their generation with extreme ultraviolet light. The measurement (false color plot) was the first of its kind in a dielectric material and yielded a time of 150 attoseconds (as), from which the physicists determined that inelastic scattering in the dielectric takes about 370 as. (Dennis Luck, Thorsten Naeser/LMU)