Physicists of the Laboratory for Attosecond Physics have measured the flight times of electrons in molecules after their creation with light. The small quantum particles were emitted from a specific atom within the molecules, which enabled to measure the molecular influence on their emission time. The results open new opportunities to study the forces that are holding molecules together in better detail.

One of the most fundamental processes in the microcosm is photoemission, in which photoexcitation by light results in the release of electrons. The kinetic energy of these electrons is characteristic for an atom and depends on the wavelength of the light. But how fast is an electron emitted from an atom? And does its journey always take the same amount of time, no matter if it comes from an individual atom or from an atom as part of a molecule? An international team of researchers led by laser physicists of the Laboratory for Attosecond Physics (LAP) at the Ludwig-Maximilians-Universität (LMU) Munich, and the Max Planck Institute of Quantum Optics (MPQ) in Garching, in Germany, have now studied the influence of the molecule on photoemission time.

The theoretical description of photoemission in 1905 by Albert Einstein marked a breakthrough in quantum physics, which is still drawing much attention in the world of science and beyond. How much such an elementary quantum particle, the electron, is slowed down or accelerated in a molecule, is an important question that promises a deeper understanding about the quantum process of photoemission and the involved forces that hold molecules together.

An international team led by laser physicists from the Laboratory for Attosecond Physics at LMU Munich and MPQ in Garching has now, in close collaboration with researchers from the King-Saud University (KSU) in Riyad and additional international partners, investigated just how long it takes electrons to be photoemitted from a specific atom within a molecule (here iodine within ethyl iodide). The measured times were in the range of tens of attoseconds. One attosecond is a billionth of a billionth of a second.

The researchers, who conducted the experiments at the Laboratory for Attosecond Science in Riyadh in Saudi Arabia, used different excitation pulses in the x-ray region to control the initial conditions for the small quantum particles. The use of machine learning helped to improve the accuracy in the experimental data analysis and enabled improved comparison to theoretical predictions. “The comparison of the experimental data with theoretical simulations finally shows the molecular influence on the time that electrons need for the photoemission process”, explains Prof. Matthias Kling, head of the research group “Ultrafast Imaging and Nanophotonics” within the LAP team. It was found that the time delay from the molecular environment was the larger, the smaller the energy of the light flashes, and therefore the initial energy of the electrons was.

The observations may be compared with exploring a landscape. When flying over it, many details at the ground remain unnoticed. When walking, every single bump is clearly felt. It is similar for the electrons. When they leave the molecule slowly, they experience more of the forces that hold the molecule together.

“Our observations indicate that experiments tracing photoemission time permit to learn about the forces within the molecules”, explains Prof. Abdallah Azzeer, head of the Laboratory for Attosecond Physics at KSU in Riyadh. “These studies could improve our understanding of quantum effects in molecules and chemical reactions.”, adds Prof. Alexandra Landsman from the Ohio-State University in the US, who leads the group that conducted the majority of the theoretical work. 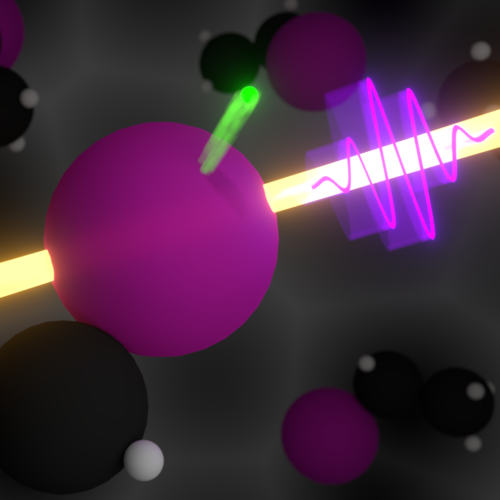