An ultrafast glimpse of the photochemistry of the atmosphere

Members of the Laboratory for Attosecond Physics have explored the initial consequences of the interaction of light with molecules on the surface of nanoscopic aerosols.

Our lives are governed by submicroscopic processes in the nanocosmos. Indeed many natural phenomena begin with a minuscule shift in the states of atoms or molecules, triggered by radiation. One such process has now been elucidated by a team led by Prof. Matthias Kling and Dr. Boris Bergues at the Laboratory for Attosecond Physics (LAP), which is jointly run by Ludwig-Maximilians Universität (LMU) and the Max Planck Institute of Quantum Optics (MPQ). The group studied how molecules that were attached to the surface of nanoparticles responded to irradiation with light. Light-induced molecular processes on nanoparticles play an important role in atmospheric chemistry, and can ultimately influence our climate.

The nanocosmos is constantly in motion. All natural processes are ultimately determined by the interplay between radiation and matter. Light strikes particles and induces reactions. By altering the energy states of electrons, it reshuffles atoms and causes molecules to be reconfigured. These processes are significantly accelerated when the reactants are absorbed on the surface of nanoparticles in the atmosphere. This phenomenon is crucial for the photochemistry of the atmosphere and thus has an impact on our health and climate. One of the light-driven molecular processes that takes place on aerosols has now been investigated in detail by researchers led by Prof. Matthias Kling and Dr. Boris Bergues at the Laboratory for Attosecond Physics, which is operated jointly by the LMU and the MPQ. The group has developed a new method, called reaction nanoscopy, which makes it possible to study elemental physicochemical transitions on solid interfaces. They have now used it to characterize the reaction of ethanol with water molecules on the surface of glass nanoparticles under the influence of high-intensity laser light.

The researchers irradiated the spherical particles with ultrashort laser pulses, each lasting for a few femtoseconds. A femtosecond is a millionth of a billionth of a second (10-15 seconds). With the aid of reaction nanoscopy, they were able to record this ultrashort interaction in three dimensions with nanometer resolution. “We have observed the detachment and acceleration of hydrogen ions from molecules on the surface of nanoparticles. The ability to do so forms the basis for the high spatial resolution of our imaging technique,” explains Boris Bergues. “Because the technology enables us to determine the exact position on the nanoparticle with the highest reaction yield, we can trace reactions of molecules adsorbed on the surface of aerosols with high spatial resolution“, adds Matthias Kling.

Such processes are ubiquitous, especially in the fields of atmospheric physics and astrochemistry. For example, light in our atmosphere interacts with aerosols and their attached molecules, triggering subsequent reactions that may be important for the development of our climate. In the universe, similar chemical processes occur on the tiniest dust grains under extreme conditions. Here, molecules are formed and undergo reactions – a process that could also contribute to the synthesis of biomolecules.

In the short term, the results obtained with the new analytical procedure by the Munich laser physicists may provide useful insights, especially in the field of atmospheric chemistry. Eventually, they could lead to a better understanding of reactions on aerosols, and might even point to ways of slowing the rate or mitigating the effects of climate change.

Picture: Alexander Gelin. An intense laser pulse (red) hits a nanoparticle made of glass and interacts with molecules on its surface. Subsequently, as depicted, hydrogen ions may be detached, and the yield of such reactions can be measured by reaction nanoscopy. 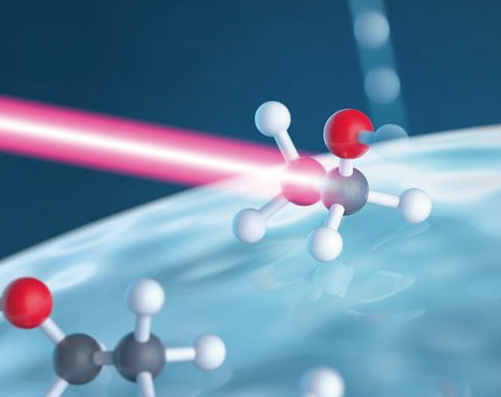